Upon arrival in Nairobi, you will be met and transferred to Tamarind Tree Hotel (or a similar hotel) for a day of relaxation (on a bed and breakfast basis).

Today you start your  Safari by Air from Nairobi.  0700 hrs After breakfast you will be transferred to Wilson Airport for your scheduled flight to Samburu in Kenya’s rugged Northern Frontier District. On arrival transfer to your luxury accommodations. Samburu Intrepids is renowned as a pioneer of luxury camping in one of the world’s last truly great wilderness areas. Situated on the banks of the Uaso Nyiro River in the arid heart of Samburu National Reserve, Samburu Intrepids looks out over riverbanks where herds of elephant, buffalo and zebra come daily to drink — together with the rarer ‘northern species’ of reticulated giraffe, Beisa’s Oryx and long-necked gerenuk antelope. Samburu Intrepids will show you this dramatic wilderness from a world of fascinating perspectives: through stirring early morning game drives, walking safaris with skilled Samburu guides to sedate camel rides. Samburu Game Reserve is unique. The vegetation comprises predominantly acacia woodland interspersed with bush, grass and scrubland, which is broken here and there by small rugged hills whilst the meandering loops of the river are bordered by a narrow gallery of riverine woodland in which acacia and doum palm flourish. This is a dry country ecosystem and is, therefore, prone to large variations in the animal populations as they move in search of water and pasture.

Three full days spent exploring Samburu. The only permanent source of water is The Uaso Nyiro River which provides excellent game viewing opportunities including elephant, buffalo, lion and leopard and of course the plains’ game. After lunch at the camp, and perhaps a swim in the pool, it’s time for a further game drive. Samburu National Reserve lies on the fringes of the vast and arid desert once known as the Northern Frontier District, whose heat-scorched scrublands extend all the way to the jade-green waters of Lake Turkana and beyond. Physically dramatic, the 104 sq kilometre landscape of the Reserve features rocky battlements, craggy scarps, dry river beds and fallen boulders rising out of the thorn scrub against a backdrop of the far-distant hills and the great red table mountain known as Lololokwi

After breakfast you will be transferred to airstrip for your flight to Mara Intrepids. Huge herds of plains game, black mane lion, leopard, cheetah, large numbers of elephant, and a wide variety of other birds and animals frequent the Mara’s tree flecked grasslands.  There are several areas of dense hippo and crocodile populations in the bends of the traversing Mara River.  Return to your camp in time for “sundowners” and dinner. 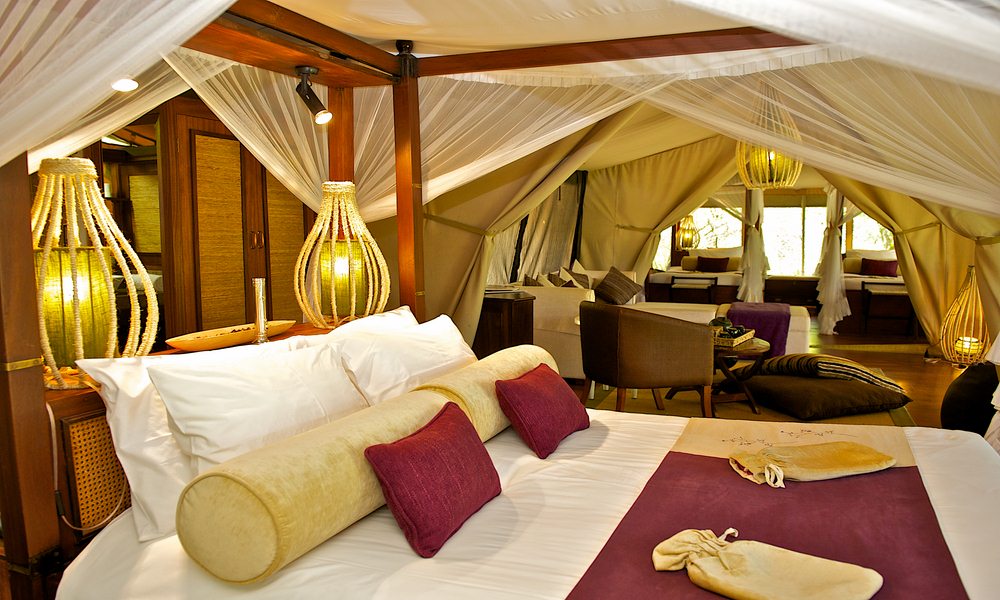 Two full days to appreciate the richness of the park’s wildlife and track game over the endless savannah.  Huge herds of plains game, lion, leopard, cheetah, large numbers of elephant, and a wide variety of other birds and animals frequent the Mara’s tree flecked grasslands.  There are several areas of dense hippo and crocodile populations in the bends of the traversing Mara River; some Mara crocs are longer than 15 feet. Set in the heart of Africa’s Great Plains, the Masai Mara boasts 1,672 sq. kilometres of unspoilt wilderness. It offers the best game and bird-viewing not only in Kenya, but anywhere in Africa. The views across the rolling golden grasslands studded with acacia trees, rivers and forests are dazzling, the sense of space overwhelming. Throughout the year the Masai Mara is a place of natural drama, a kaleidoscope of colour and life. The famed “Big Five” – elephant, rhino, lion, leopard and buffalo – roam the reserve, together with hundreds of other species, from the fastest animal on earth, the cheetah to crocodiles and magnificent birds of prey.

0630 hrs early morning game viewing, then return to the camp for breakfast at around 0830 hrs. 1030 hrs, transfer to Olkiombo Airstrip for your return flight to Wilson Airport.

Take this opportunity to sample some of Nairobi’s excellent local restaurants (this is at your own cost). Then proceed to Jomo Kenyatta  International Airport for your homeward bound flight.