No where in the world is there a movement of animals as immense as the wildebeest migration, over two million animals migrate from the Serengeti National Park in Tanzania to the greener pastures of the Masai Mara National Reserve in Kenya during July through to October.

In the Maasai Mara they will be hunted, stalked, and run down by the larger carnivores. The Maasai Mara also has one of the largest densities of lion in the world and is no wonder this is the home of the BBC wildlife channels Big Cat Diary.

Remember that the wildebeest migration normally start from about mid June to mid October. February and March are great for the big cats and Christmas is again a stunning time.

The stage on which this show is set is loosely termed the Serengeti Ecosystem, about 40, 000 square kilometres pretty much defined by the dominant migration routes of the white bearded wildebeest (Connochaetes tuarinus mearnsi) and comprises parts of the Ngorongoro Conservation Area in the south; the Serengeti National Park and the adjacent Maswa Game Reserve and other ‘controlled’ areas in the centre, east and west; and the Maasai Mara National Reserve to the north. The principle players are the wildebeest, whose numbers appear to have settled at just under 1.7 million, with supporting roles from some 400,000 Thomson’s gazelle, 300,000 zebra and 12,000 eland. These are the main migrators and they cross the ranges of over a quarter of a million other resident herbivores and, of course, carnivores. The lions, hyenas, leopards, cheetahs and lesser predators await the annual coming of the great migration with eager anticipation.

In reality there is no such single entity as ‘the migration’. The wildebeest are the migration – there is neither start nor finish to their endless search for food and water, as they circle the Serengeti- Mara ecosystem in a relentless sequence of life and death. ‘

Every year, millions of wildebeests, zebras, antelopes, gazelles, elands and impalas move through a fairly predictable clockwise movement around the Serengeti-Masai Mara ecosystem in search for better grazing and fresh water. Although their every movement depends on the rainfall patterns, this map will allow you to peek through the flux of the famous Great Wildebeest Migration. 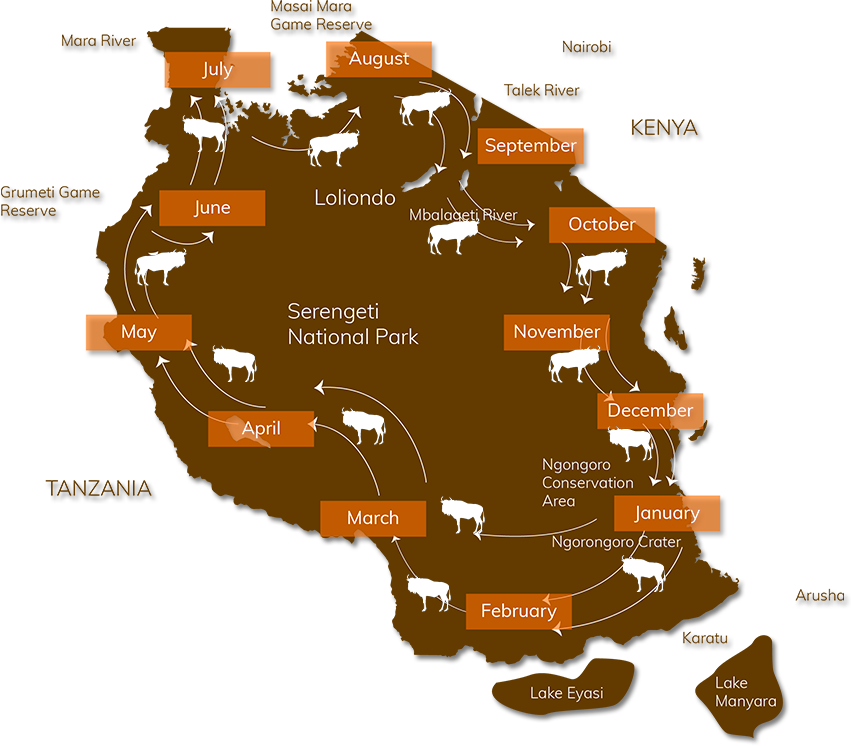 The herds are on the short grass plains of southern Serengeti, Ndutu area and northern part of Ngorongoro Conservation Area in Tanzania. By the end of the month, the calving season begins. Approximately 8,000 wildebeests are born everyday during the height of this season. With thousands of feeble calves, predators are at large while adult wildebeests protect their young.

The calving season continues. You can see mother wildebeests making some sort of a barricade around their young to protect from large opportunists like lions, hyenas and cheetahs. You can also see baby wildebeests taking off just minutes after being born and even little cubs being trained by adult lions to make a kill. This season is certainly one for the books — lots of action, lots of drama, lots of wonder.

The herds remain dispersed across the plains of the southern region of Serengeti. They feed on leftover fresh grasses, the last batch of calves are born and then they start to gather around for their next journey heading north.

The wildebeest herds start to move northward to seek fresh grazing and water. Some have left early and are already in the central and western regions of the Serengeti.

The massive herds funnel up into the central and western Serengeti. You can see hundreds and thousands of animals in the areas surrounding Moru Kopjes and western Seronera as the huge wildebeest herds are joined by plenty of zebras as well as Thomson’s and Grant’s gazelles.

The migration usually slows down as herds reach the south side of the Grumeti River. They congregate around the Western Corridor where they pile up to cross the series of pools and channels. Large crocodiles await as they do so, but since the river is not continuous, the crossing is not usually as bloody and challenging as the one they’re about to face on their journey further north.

Migration continues as most herds scatter around Grumeti Reserve and Ikorongo while a few spread out to the hear of the Serengeti National Park. Prepare yourself because around the end of this month, the incredibly dramatic Mara River crossing ensues. As migrant animals struggle for survival, a wealth of huge Nile crocodiles and mighty hippos await in the brown waters of the river. This spectacular event, known as the “World Cup of Wildlife”, is often deemed “the greatest show on earth.”

The action-packed river crossing continues as millions of wildebeests along with thousands of zebras, gazelles and kudus rush frantically through the river and into the adjacent Masai Mara Game Reserve in Kenya.

The survivors celebrate in the northern plains of the Serengeti while others feast on the lush grasses in Masai Mara. Sometimes, depending on the rains, the movement of the migration extends and the river crossing happens in August and until the first weeks of September.

You will see large herds of wildebeests, zebras, antelopes, kudus and gazelles in Masai Mara Game Reserve. Some of them just stays in the Mara for a few days and moves south afterwards.

Rains begin and the herds start moving down south, leaving Masai Mara. Passing through western Loliondo as well as Serengeti’s Lobo area, the herds move in accord as they move back into the fertile plains of the Serengeti.

The herds cluster around the northeastern and southern regions of the Serengeti. They all disperse through the plains and feed on fresh grasses as the calving season creeps up and the cycle begins again.

Get to Know Us