Kenya’s flagship park, the Masai Mara National Reserve, is one of Africa’s finest wildlife destinations where quintessential safari landscapes of vast acacia-dotted savannas teem with animals. The stellar highlight of the Masai Mara is, without a doubt, the Great Migration, an annual movement of millions of wildebeest, gazelle and zebra migrating between neighbouring Tanzania the Kenyan park. Seeing the dramatic daily scenes of the Great Migration – the massive, noisy herds, the animals making the perilous crossing of the crocodile-infested Mara River and the thrilling big cat hunts – are among the best and most exciting wildlife experiences you can have in Africa. Simply put, it is the best destination in Kenya for viewing wildlife – and lots of it!

Not only is the Masai Mara one of the greatest wildlife reserves in Kenya, it is also unique in that it is not managed by the country’s wildlife services but rather by the local Maasai communities.
Located on Kenya’s south western boundary with Tanzania the Masai Mara Reserve joins the Serengeti wildlife area to form possibly the most dramatic wilderness area on the continent.

It takes about 5 hours to get there by road and 45 minutes by air. There are scheduled flights from both Jomo Kenyatta National Airport and Wilson Airport.

The grassy savannah landscape enhances the beauty of the reserve. Scattered acacia woods and bush stand out in the plains. There is also a riverine forest, due to the presence of the Mara River, where most of the bird species dwell. The Maasai culture is another major attraction. One of the best-known tribes, the Maasai have maintained their culture even as other tribes fall prey to

modern practices. Their bright colored clothes and traditional dances are a must-see.

If you have sufficient funds, consider taking a balloon trip over the reserve. This popular and thoroughly memorable ride usually commences before dawn and includes a champagne breakfast. Viewing abundant game afloat a balloon is an unforgettable experience.

There is a wide range of accommodation to suit all budgets. Most Maasai Mara lodges and camps are conveniently located within the game reserve due to its long distance from any major town.

The Masai Mara Game Reserve, started as a small wildlife sanctuary 520 Km2 in 1948, it was extended eastwards in 1961 and went through some size variations before reaching the current size of 1,510 Km2 that it is today. The reserve originally got its name from the Maasai people who called the area “Mara” which in Maa (language of the Maasai) means ‘spotted’. This is exactly what the area looks like from afar. Great sweeping plains, spotted with umbrella acacia trees, bushes and animals.

In the east are the sandy Ngama Hills covered in thick bush, favoured by the black rhino. The western border is demarcated by the Oloololo Escarpment. On the northern border is the Musiara Swamp, a great place for sighting elephant, lion, cheetah and leopard. The Mara Triangle is bordered by the Mara River, which has lush grasslands, attracting high concentrations of wildebeest during the annual migration.

The Mara River originates in the Napuiyapi Swamp, in the Kenyan highlands, as the Amala and the Nyangores rivers, providing water for human and animal alike along its route. The two rivers converge to form the Mara River which flows through Africa’s greatest wilderness areas including the Masai Mara and Serengeti before ending in Lake Victoria – but it is on its route through the Masai Mara where it hosts the most dramatic natural events on earth.

The Mara River is the major water source in the Masai Mara National Reserve, providing water year round for the thousands of animals of the National Reserve, but it is in the months of late July to October that the river hosts the herds of the Great Migration – and the famous drama-filled river crossings. Giant Crocodiles wait all year for the herds to cross the Mara, and when they do, the Crocodiles feast.

The Masai Mara ecosystem contains around 25% of Kenya’s wildlife; much of this wildlife is found outside of the actual reserve in rangelands. These rangelands belong to a variety of landowners, some private individuals, some belong to communities and some to groups of individuals on lands that were formerly community land and have since been subdivided. Many of these land owners are pastoralists, traditional Maasai. These lands comprise most of the ancient migratory corridors bordering the famous tourist attraction, the Masai Mara. Currently five conservancies have committed to this initiative.
Enonkishu Conservancy
Situated on the northern most point of the Greater Mara Ecosystem, running along the Mara River. There is a large number of giraffe and plains animals and resident buffalo that live near the boundary. There is a resident pride of lion that have their territory inside the conservancy. Also hippos and crocodiles are numerous along the river, and leopards are found in the riverine forests. Rare species like aardvark, caracal and aardwolf are also occasionally found here. They also focus on cattle management programmes working in conjunction with the local community.
Mara Naboisho Conservancy
Located adjacent to the Masai Mara Reserve, is a private conservancy, with a high concentration of wildlife encounters. Big cats are found in impressive numbers as are elephants, giraffe and wildebeest. This conservancy offers exclusivity and also protects and empowers the local Maasai community by channelling a large part of the conservancy fees paid by tourists back into the community.
Mara North Conservancy
This is a non for profit company, made up of a partnership of twelve member camps and 788 Maasai landowners. They provide world class commitment to the environment, wildlife and local communities. It borders the Masai Mara Reserve, and is one of the most populated wildlife areas within the Masai Mara. It is home to Leopard Gorge, a birthing and maternity ground for big cats made famous by the BBC’s “Big Cat Diary”. Also a good place to view the highly endangered wild dogs. During the Loita Hills migration (Dec to May) thousands of wildebeest come to Mara North.
Ol Kinyei Conservancy
The first conservancy in the Mara ecosystem where an area of 8,000 acres of community land was set aside for wildlife with no human settlements and cattle. The conservancy is now 17,500 acres and belongs to the Maasai community, who set aside their land for wildlife conservation, providing them with returns to help them improve their lives and not be solely dependant of cattle. There is a resident pride of over 30 lions, leopards and numerous other animals, plus over 300 species of birds. With only two camps with a total of 15 tents on this conservancy you can enjoy the wildlife without the crowds.
Olare Motorogi Conservancy
In May 2006 a deal was brokered with 277 Maasai landowners and this conservancy was formed, bordering the Masai Mara Reserve.They offer high quality low traffic safaris. The Maasai people have agreed to move their homes from the area and only allow managed cattle grazing, leaving the wildlife unimpeded. As a result the wildlife population and diversity has improved in the area. There are now good populations of predators and herbivores, including big cats and elephants.

Measuring 1510 square kilometers, Masai Mara National Reserve is a spread over a large area and therefore has several entry gates to access the reserve. Using the correct gate during your trip to Masai Mara can save you hours of additional driving. Below we have a list of the main gates at the main Masai Mara reserve along with basic information on which lodges and camps are closest to the various access points. As for entry and exit timings, the entry timing is 6.00am and exit timing is 6pm, after which the gates are closed. It may be possible to enter or exit beyond these timings in exceptional cases with the permission of the reserve Warden, for example in case of a vehicle breakdown or maybe adverse weather causing road closures. 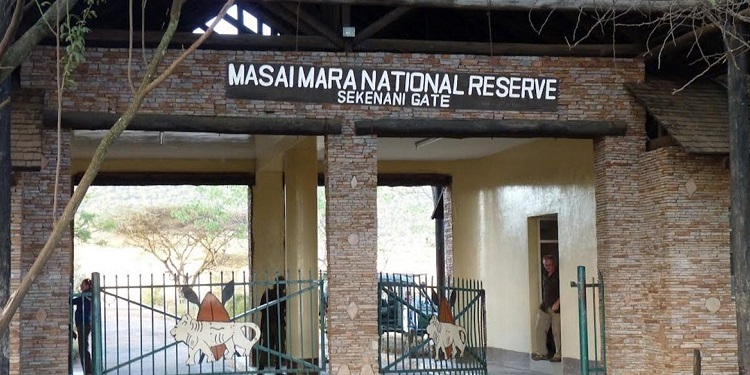 Sekenani Gate is located on the outskirts of Sekenani town, amidst vast Savannah plains on the eastern border of Masai Mara national reserve. 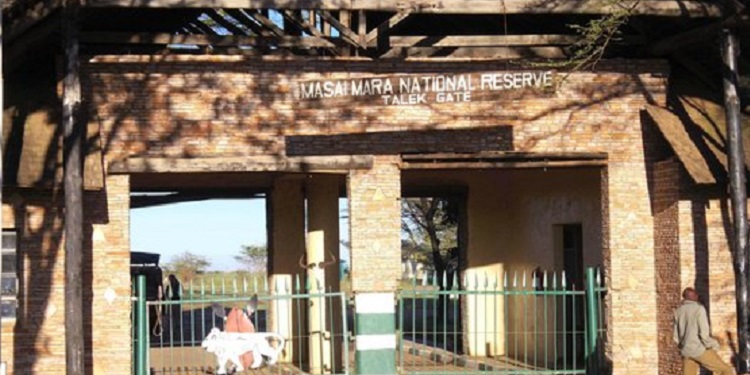 Talek Gate is one of the most developed gates in Maasai Mara. It is located on the North western side of Maasai Mara National Reserve, amidst the large open Savannah grass land right next to the famous Talek River which acts like a natural border between the Eastern and Western region of Maasai Mara. 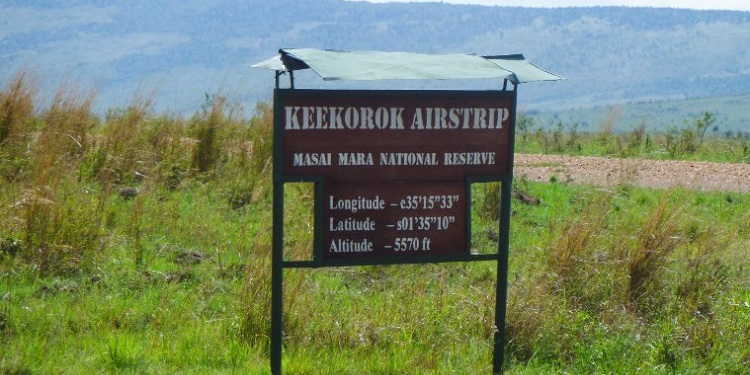 Musiara Gate is located on the north eastern end of Maasai Mara National Reserve, a short distance east of Oloololo gate, though on the opposite side of the mara river. 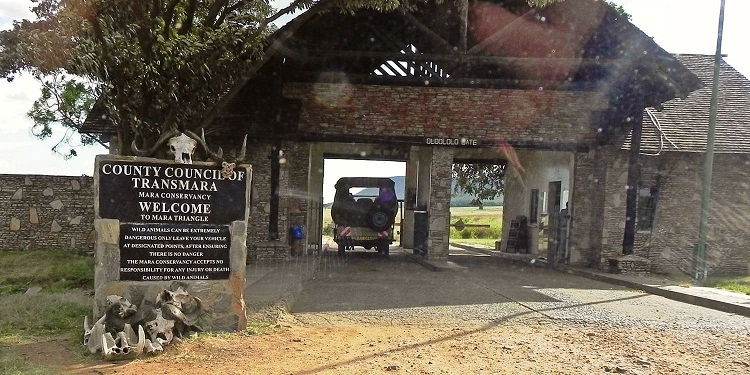 Oloololo gate is located on the north eastern region of Maasai Mara National Reserve, a short distance south of one of the tributaries for the Mara river. The gate is accessed through C13(Aitong road) and C14 (Singor – Kaboson road). You can also use this gate to drive to west of the Mara river ( a few minutes drive) and a similar distance north of the walls of the rift valley known as the Oloololo escarpment. 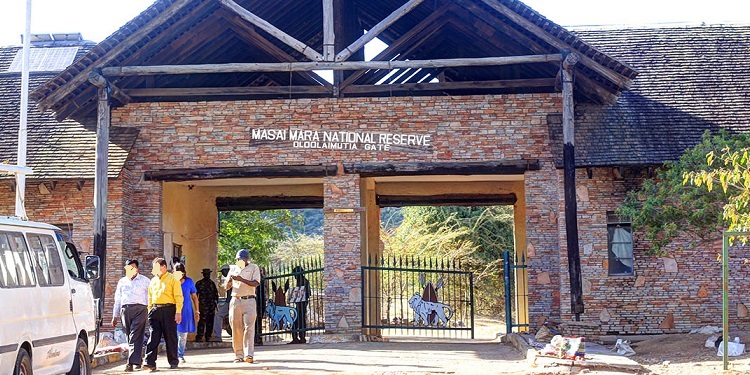 Oloolaimutia Gate is located on the outskirts of Oloolaimutia town, amidst the hilly eastern end of Masai Mara national reserve. 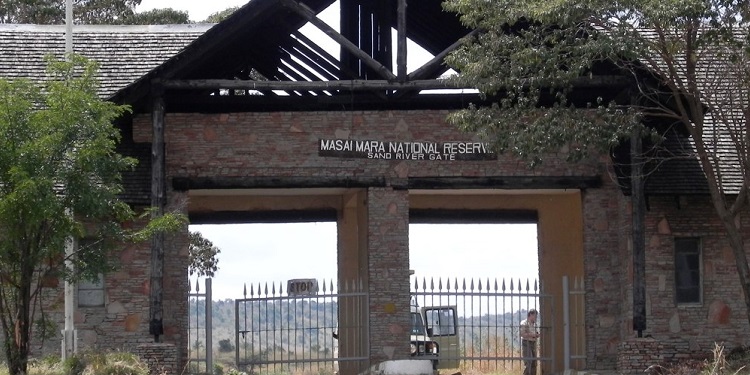 The Sand river gate is located on the northern banks of the Sand river, one of the tributaries for the Mara river as well as a crossing point for the wildebeest migration. It also sits on the southern border of masai mara national reserve, a few metres from the border between Kenya and Tanzania as well as the Bologonja gate into serengeti national park.

Due to the nearby border between Kenya and Tanzania being closed to tourists, the gate is seldom used, with most using the Isebania border instead.

Despite being in the wilderness, Masai Mara has some amazing hotels painstakingly built and established over years in what is essentially the remote wilds of Africa. Some of these luxury tented camps and Safari Lodges are international award winners. This page is a simple list of some of the more outstanding accommodation in Masai Mara in the Luxury, Mid Range and Budget categories.

Most tourists come to East Africa hoping to see the so called ”Big Five”, namely Lion, Elephant, Rhino, Leopard and Buffalo. Well, the Mara is one of the few places in Africa where seeing all these five animal species is not just possible but also fairly likely during a 3 day safari.

With close to 70 mammal species and hundreds of Bird species to be found in the greater Masai Mara region, it is no wonder that this wildlife area is referred to as a literal Animal Kingdom of sorts, a true preservation of animals in the modern day era. Below is a brief check list of wild animals and mammals in Masai Mara.

Although not the obvious choise of destination for Birding in Kenya, which after all is home to some of the best birding hotspots in the world, Masai Mara is still a very good place for Ornithological tours, with over 500 species recorded, with many of these being raptor species.